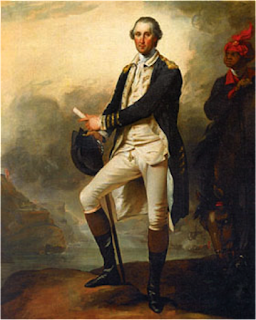 
During the eighteenth and early nineteenth centuries boots surpassed shoes as the fashionable footwear for men. Now more refined, styles were trimmer and worn with turned down tops. The two-tone boots were lined in brown which contrasted with the outer black leather of the rest of the boot. Jockey boots were introduced in 1780 and fashionable top boots were elegant and similar in appearance to the boots worn by horse jockeys from the newly fashionable sport of horse racing (Baynes & Baynes,1979). Two-tone top boots were worn below the knee for outdoors with tans and pale shades popular with the gentry. The need to protect feet from the elements necessitated new materials be developed and during the 1790's patent leather became available. Shoes and boots treated with the new process became very popular on both sides of the Atlantic. 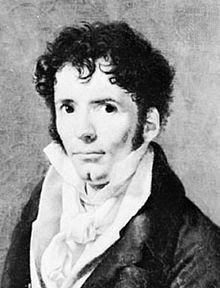 
According to O’Keeffe, (1996) women were considered too delicate to venture outdoors and hence wore shoes which were flimsy by comparison. When boots were worn for equestrian pursuit these were based upon modified versions of men's footwear. French writer and wit, Nicolas-Sebastien Chamfort (1741-1794) observantly wrote in his comedies of the common habit for ladies many of whom would tip their man servants to help them remove their tight shoes. Chamfort was referring to the flirtations which resulted from exposure of forbidden flesh which was a common practice among the upper classes. 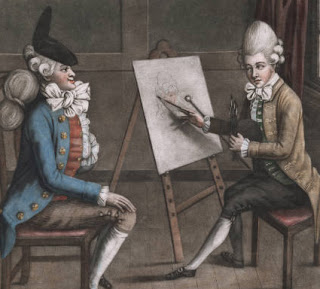 
Young Englishmen of the late 18th century became obsessed with all things foreign and exotic. Christened Macaronis, they rivaled the ladies with their tall wigs powdered them in different colours like blue, pink, purple, etc. Macaronis met in gentlemen's clubs such as The Macaroni club and gambled, womanized, sodomized, gossiped, and wasted countless pounds on frivolous things. They wore iron heel clips fitted to their shoes to draw attention to themselves as they clipped noisily through the streets. 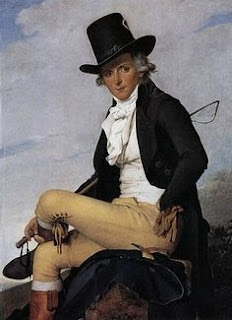 At the beginning of the 19th century, during the Regency Period (1811 to 1820). Dandies were the epitome of machismo, always wearing something unique but very fashionable. 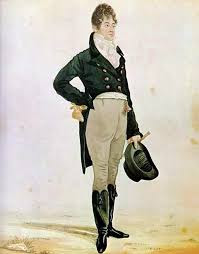 George Beau Brummell (1790 - 1840) epitomised the new age macho dresser and was well known for his idiosyncrasies including having his boots polished with champagne. He also insisted the boot soles were polished at the same time as the uppers in order to ensure the edge of the boots had a perfect shine. 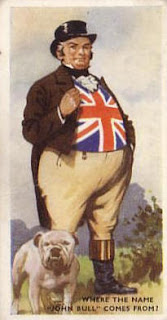 The two styles of boot which enjoyed vogue with the dandies were the English, John Bull (or tall boot) and the German , Hessian boot (also called the Souvaroff boot).

Hessian boots took their name from the German state of Hesse, where they were made. Hessians or the soldiers from Hess, commonly fought under the British flag including including in the Irish Rebellion of 1798. The Hessian boot was knee high and cut on a V at the front and made from soft leather. Often the boot had a decorative tassel. 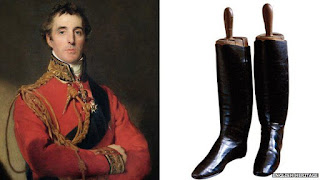 The Duke of Wellington instructed his shoemaker, Hoby of St. James's Street, London, to modify the 18th-century Hessian boot. The resulting new boot was fabricated in soft calfskin leather, had the trim removed and was cut to fit more closely around the leg. The heels were low cut, stacked around an inch (2.5 centimetres), and the boot stopped at mid-calf. It was suitably hard-wearing for riding, yet smart enough for informal evening wear. The boot was dubbed the Wellington and the name has stuck in English ever since. In time the Wellington boot superseded the popularity of the Hessian boot and were worn to the knee over trousers. Wellington's utilitarian new boots quickly caught on with patriotic British gentlemen eager to emulate their war hero. Considered fashionable and foppish in the best circles and worn by dandies, such as Beau Brummell, they remained the main fashion for men through the 1840s. In the 1850s they were more commonly made in the calf-high version, and in the 1860s they were both superseded by the ankle boot, except for riding. 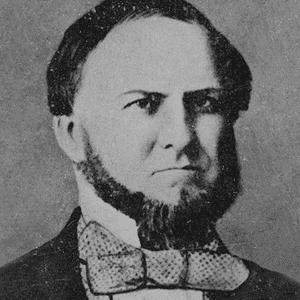 
In 1852 Hiram Hutchinson met Charles Goodyear, who had just invented the vulcanisation process for natural rubber. While Goodyear decided to manufacture tyres, Hutchinson bought the patent to manufacture footwear and moved to France to establish À l'Aigle ("to the Eagle") in 1853, to honour his home country. Today the company is simply called Aigle. In a country where 95% of the population were working on fields with wooden clogs as they had been for generations, the introduction of the wholly waterproof, Wellington-type rubber boot became an instant success. Farmers were able to come back home with clean, dry feet. 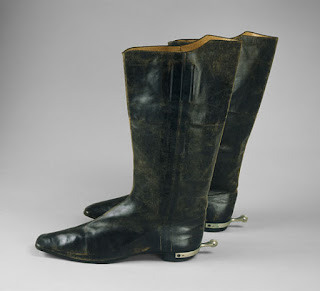 Napoleon boots were cut high in the front and worn to the knee. Boots which did not encase the knee gave freer movement on horseback whilst the high cut offered protection to the knee joints. It was common practice to wear long woollen stockings under the knee high riding boots. Napoleon boots were the model which eventually influenced modern cowboy boots. 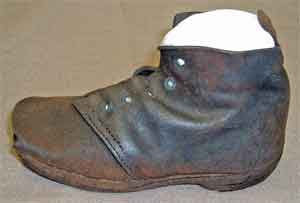 Blucher shoes were based on a shorter boot worn by Prince of Wahlstadt, Gebhard Leberecht von Blucher (1742 - 1819), a Prussian field Marshall. His popularity was second only to Wellington as a hero of the battle of Waterloo. The blucher or derby was a high cut shoe with a tongue cut in one piece with the forepart and fastened with laces. 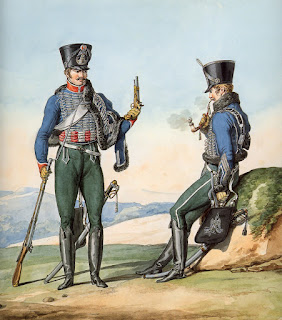 By the end of the century young men wore the popular Hussar buskins which were short boots with a dip in the front, mid tibia. French top boots with a turned over top were also fashionable. 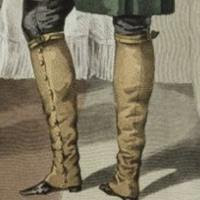 A new vogue came for splatterdashes which were puttees or leggings that buttoned on the inside of the leg were worn to protect the delicate silk hose during inclement weather. 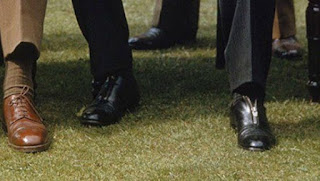 
Disclaimer: Reliance on information, material, advice, or other linked or recommended resources, received from Cameron Kippen, shall be at your sole risk, and Cameron Kippen assumes no responsibility for any errors, omissions, or damages arising. Users of this website are encouraged to confirm information received with other sources, and to seek local qualified advice if embarking on any actions that could carry personal or organisational liabilities. Please retain this notice on all copies. © cameron kippen 2021.

Copyright Disclaimer Under Section 107 of the Copyright Act 1976, allowance is made for "fair use" for purposes such as criticism, comment, news reporting, teaching, scholarship, and research. Fair use is a use permitted by copyright statute that might otherwise be infringing. Non-profit, educational or personal use tips the balance in favor of fair use.


Cameron Kippen is a former academic and amateur shoe historian and freelance broadcaster and blogger. He has no affiliation with footwear manufacturers, or retailers. The information on this blog has been collected and reported in good faith and wherever possible, from refereed materials. Where triangulation was not possible, information was taken at face value and unless stated otherwise represents the opinions of the author.